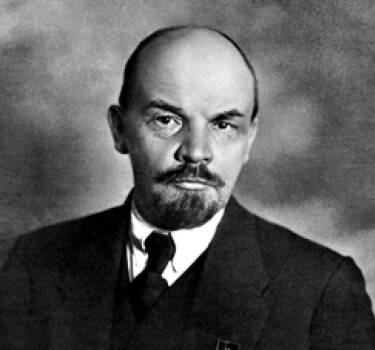 Vladimir Lenin (Ulyanov by his real surname) was born in 1870 in Simbirsk to the family of a public-school inspector. In 1879–1887, Vladimir studied at a gymnasium school and graduated from it with a gold medal. Alexander Ulyanov, the eldest son in the family, was an active revolutionary and a member of the Narodnaya Volya Organization (an organization proclaiming people's willpower). He was a role model for his younger brother. In 1887, Alexander was executed for preparing an attempt to kill Emperor Alexander III. In the same year, Vladimir Lenin enrolled into the Law Department of Kazan University but was soon expelled without the right to resume his studies for taking part in the illegal team of Bogoraz.

In 1891, Vladimir Lenin graduated from the Law Department of St. Petersburg University as an external student. In those days, he worked on his first book titled "What the 'Friends of the People' are and How They Fight the Social-Democrats". In 1895, Vladimir Lenin took an active part in the creation of the St. Petersburg Union of Struggle for the Emancipation of the Working Class. For this activity, Lenin was exiled to the village of Shushenskoye, the Yenisei Province, for three years. In 1900, he was forced to leave for Western Europe, where he published the first all-Russian illegal Marxist newspaper "Iskra".

In 1903, at the Second Russian Social Democrats Congress, as a result of the split between the Mensheviks and the Bolsheviks, Vladimir Lenin headed the revolutionary majority thus creating the Bolshevik Party.

During the first Russian revolution of 1905–1907, he lived illegally in St. Petersburg and coordinated the activities of the left-wing forces. In 1907, Lenin had to leave Russia again, but for a longer period of 10 years. During the First World War, he put forward the idea of the national government defeat, which, being implemented throughout Europe, was bound to lead to the victory of the socialist revolution and the working class.

Since April 1917, while in Petrograd, Vladimir Lenin became one of the main organizers and leaders of the October armed uprising and the establishment of the power of the Soviets. On his personal instructions, on October 31 and November 2, 1917, detachments of sailors, soldiers and Red Guards were sent to Moscow from Petrograd to ensure the transfer of power to the Soviets in Moscow. On October 25, 1917, the government was overthrown and power in central regions of the country passed to the Bolsheviks. Until 1922, Lenin was the leader of the Bolshevik forces in the Civil War.

Having come to power, the Bolsheviks, led by Vladimir Lenin, created a new type of state aimed at stimulating the most rapid world socialist revolution. Unlike the European Social-Democracy wing, the Bolsheviks were radical and rejected any possibility of reforming capitalism.

Lenin had a broad outlook and vast knowledge in many fields, including economics. He developed and tried to implement the policy of military communism. Although, having realized its inadequacy, he proposed a new economic policy, which favourably affected the development of the Soviet state.

In 1922, after being wounded in the assassination attempt by Fanny Kaplan, Lenin was seriously ill and withdrew from active political activity. Since May 1923, due to the sharp deterioration of his health, Lenin lived in the state vacation estate of Gorki (currently, Gorki Leninskie reserve museum). The last time Vladimir Lenin was in Moscow on October 18–19, 1923. He died in 1924 in Gorki, near Moscow.