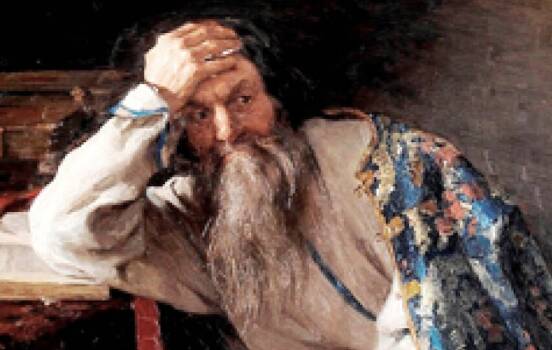 Ivan was born to the family of the Grand Duke of Moscow Vasili III (Rurikovich) and the Lithuanian Princess Elena Glinskaya in 1530. However, as early as in 1533, Ivan lost his father; in 1538, his mother died as well. After the death of his father, young Ivan IV witnessed a fierce struggle between the Velsky and the Shuisky boyar families, which caused the tsar's suspicion and mistrust of the boyars.

In 1547, Ivan decided to get crowned as a tsar, which significantly raised the status of the Moscow ruler to the title of an emperor or a khan. Already after 2 years, Ivan established the Chosen Council (Izbrannaya Rada) that initiated a number of reforms. The Council included the most progressive people of that time: Alexey Adashev, Andrei Kurbsky, Protopop Sylvester, Metropolitan Makariy. In 1550, the Streletskoye Voysko firearm infantry was created, which significantly increased the defence capability of the country. A collection of laws called Sudebnik was compiled to harmonize all contemporary normative legal acts. In 1555, Ivan adopted the Regulations on Service, a document that brought public service under control and clarified the rules of land ownership. By 1556, the apanage principality support system had been abolished throughout the country, and a local government system had been established under the system of administrative departments (prikazes) on the state level. The prikazes could be sectoral or territorial.

The foreign policy of Ivan IV had two strictly distinguished directions — the eastern and western ones. In 1552, Ivan IV had his first luck — the Russian troops took over the city of Kazan, which led to the accession of the entire Kazan Khanate to Russia; in 1556, Astrakhan was also annexed. Since 1581, the Russians crossed the Ural Range and spread over Western Siberia.

Successful accession of Astrakhan and Kazan convinced Ivan of the invincibility of his new army. He decided to annex the territory of the weakening Livonian Order. In 1558, the Livonian War began. Sweden, Poland, and Denmark joined it. In 1583, as a result of this long-running conflict, Ivan had to admit his defeat and abandon a number of territories in the Baltic.

Contradictions on foreign policy issues had a negative effect on the relations between the tsar and Alexey Adashev, the head of the Chosen Council. The death of tsaritsa Anastasia in 1560 deepened the suspicions of the tsar. From 1565 to 1572, the country was divided into two parts — the zemshchina and the oprichnina. Oprichniks made up a special military monastic order headed by hegumen Ivan the Terrible himself. Many cities were devastated and destroyed through the oprichniks’ activity that is considered to be the cause of the Time of Troubles (Smuta) by some historians.

Ivan the Terrible died in 1584 in rather mysterious circumstances.