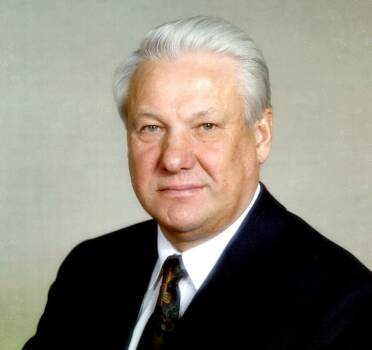 It is difficult to evaluate Yeltsin’s activities impartially since too little time has passed since the period of his leadership of the country. Only one thing is certain: he was a person who turned the course of history and conducted a series of reforms with questionable consequences for Russia.

Within his domestic policy, Yeltsin pursued a course on the democratization of the political system of the country. In 1993, during the events caused by the internal political conflict among the high-level leaders of the Russian Federation, Yeltsin managed to defeat the opposition represented by Vice President Alexander Rutskoi and supporters of the Supreme Soviet of the Russian Federation led by Ruslan Khasbulatov. Finally, Yeltsin remained in power, the country continued to stay the course, and all the Soviets of People’s Deputies were eliminated.

The constitutional foundation of Russia’s political system was formed under Yeltsin. In December 1993, the Constitution of the Russian Federation was adopted, and the country became a presidential republic. Fundamental codes of laws were adopted either.

In 1994, during his fight against separatism and efforts to prevent the collapse of the state, Yeltsin sent troops to the Chechen Republic. The official name of the operation was “The constitutional order restoration in the Chechen Republic”. It lasted from December 11, 1994, to August 31, 1996. The Counter-Terrorist Operation in the North Caucasus was conducted later from August 7, 1999, to April 16, 2009.

The development of the foreign policy of Russia under Yeltsin can be divided into two periods: 1991–1996 — a period of failed attempts at rapprochement with the West; 1996–1999 — a period of disappointing attempts to establish cooperative relations with the Euro-Atlantic states, form a more independent policy course under the Minister of Foreign Affairs of the Russian Federation Yevgeny Maksimovich Primakov, as well as to refocus relations mainly towards China, India and some other Asian countries.

Economical changes included liberalization of prices and foreign trade, privatization, inflation control, splitting up of large agricultural enterprises and changing their organizational type. The first directions were a kind of “three pillars” of economic reforms.

None of the reforms aimed at forming the constitutional foundation of the Russian political system was later revised or cancelled.

By the end of 1992, Russia had overcome the commodity deficit. Market mechanisms had been launched in the Russian economy, but a full-fledged market economy had not been created yet. However, in August 1998, the Government of the Russian Federation and the Central Bank declared a technical default, which was followed by one of the most severe economic crises in Russia. There were several reasons for the crisis: an inefficient macroeconomic policy of Russia under a challenging domestic economic situation; a sharp decline in world energy prices; a financial crisis in Southeast Asia. On top of that, a new class of large owners had been created in Russia, while a huge part of the country’s population had become impoverished, and the number of small enterprises had decreased significantly and sharply. Thus, the differentiation of incomes of the population had been growing rapidly. Economic growth tendencies manifested themselves only at the turn of 1998–1999.

The reduction of sown areas, livestock, and agricultural land, as well as a general regression, were the consequences of the economic reforms for the agro-industrial complex.

The decline in science funding during the implementation of the reforms, among other things, caused a decrease in the prestige of scientific work. The number of academic science workers reduced by almost a third.

Throughout the 1990s, the country saw an increase in crime.

However, there is an opinion that the positive dynamics in the Russian economy in the early 2000s were due to the manifestation of the long-term consequences of the reforms of the Yeltsin period.

Yeltsin’s political and party career began in 1968 at the Sverdlovsk Regional Committee of the CPSU (Communist Party of the Soviet Union), which Construction Department was under his command. From 1978 to 1989, Yeltsin was a deputy of the Supreme Soviet of the USSR. The career rise of Boris Yeltsin began in the early perestroika period. In 1985, he was the head of the Construction Department of the Central Committee of the CPSU and the First Secretary of the Moscow City Committee of the CPSU. The following year, he became a candidate member of the Political Bureau of the Central Committee of the CPSU. Even then, he got famous for his democratic views and frequent criticism of the existing system. For his harsh remarks about the work of Gorbachev and the Political Bureau, he was removed from his position and was in disgrace for a period of time. In 1989, Yeltsin was elected USSR People’s Deputy for Moscow and became the leader of the democratic movement in the country.

In March 1990, Yeltsin became Chairman of the Supreme Soviet of the RSFSR (Russian Soviet Federated Socialist Republic). During his tenure, he made an attempt to implement radical reforms which were opposed by the leadership of the USSR. It resulted in the deterioration of Yeltsin’s relations with Gorbachev. The relations between the RSFSR and the USSR took turn for the worse. This was also facilitated by the adoption of the RSFSR State Sovereignty Declaration by the Congress of People’s Deputies of the RSFSR on June 12, 1990. In 1990, Boris Yeltsin abandoned the CPSU. On June 12, 1991, he was elected President of the RSFSR. After the August coup of 1991 and the collapse of the USSR, Yeltsin’s position as Russian President got strengthened, but with the onset of economic reforms carried out by Yegor Gaidar, his rating began to wilt.

The media and political scientists assessed Yeltsin as a charismatic, power-hungry, unpredictable and persistent person. Yeltsin’s opponents, on the contrary, qualified him as a cruel, vindictive and uncultured person. Stable ideological views were uncomfortable for Yeltsin, as he preferred to follow his intuition. Being a man of an inquisitive mind, Boris Nikolayevich Yeltsin always tried to think fresh. Due to his health problems, he was often absent from his workplace, but he demanded strict punctuality from those around him.

In 2006, President Putin said: “You can evaluate the activities of the first president in any way you like. But, of course, it was precisely at the time when Boris Nikolayevich Yeltsin headed Russia that the people of our country, the citizens of Russia, received the main thing for which all these transformations were carried out - freedom. This is a huge historical merit of Boris Nikolayevich. How would each of us, including myself, act in those conditions, one can only guess.”