The Minister of Cultural Affairs Vladimir Medinsky talks about how the ignorance of history can turn a nation into a shallow population. 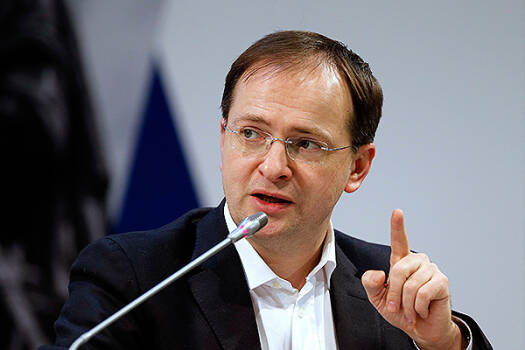 Every country has a National Pantheon of Heroes. There wouldn’t be any historical memory nor a nation without one. This is a very important issue in our time. The National Pantheon isn’t a grave site of prominent figures, nor is it a "temple of all Gods", as in Ancient Greece. It’s a collection of brilliant people who’ve achieved so much in areas of culture, art and science. And let us never forget, the heroes who’ve performed incredible acts of bravery. These people live in the memories of the Nation.

Usually historians try to preserve everything, yet they still manage to undeservedly forget something. Only two names of soldiers who hoisted the Victory Banner over the Reichstag were fixed in the national memory - Mikhail Yegorov and Meliton Kantaria. But there was also a third person - Lieutenant Alexei Berest, their commander. To Russians, it’s no secret. This is the official version of the story. And still only two names are on everyone’s lips. Berest received an award and was left behind.

The same thing happened to Minin and Pozharsky, after the victory over the Polish-Lithuanian intervention in 1612. They were declared heroes, but everyone forgot about knyaz Skopin-Shuisky and the vaivode Shein.

There are heroes whose exploits are being wiped out by propaganda. I doubt that nowadays young people will remember what Pavlik Morozov did, what Alexey Stakhanov or Kliment Voroshilov were famous for. Although just a few decades ago, these people were the brightest stars of the Pantheon of Heroes in Russia. The circulation of the novel "How the Steel Was Tempered" reached almost 40 million copies at one time. But if you were to ask the youth of today who is Nikolai Ostrovsky? You will seldom find a man less than a thousand who can answer.

Every country does its best to expand its Pantheon of Heroes. After all, heroes create a collective national archetype. Pozharsky, Dmitry Donskoy, Alexander Nevsky, Kutuzov, Suvorov, Zhukov. It is important that the heroes of the Great Patriotic War also remain in this pantheon. We’ve not only forgotten many of their names - we simply don’t know them.

Who made the first ram during the war? Historians still argue about that. There were several heroes in the first hours of war. Everyone knows the heroic act of Captain Gastello. His battering ram is called "the fire ram", because he steered a burning plane to a ground target. But he didn’t operate a battle-plane, he operated a bomber. This means that there were at least three people on board, thus, it was a joint decision to ram. All three of them were communists and they decided to sacrifice their lives for the sake of victory together. So the actions of these heroes acquire a totally different flavor. There were recorded 237 “fire” rams following the example of Gastello during the war!

In total, the Russian forces made approximately 600 rams over the years of the Great Patriotic War, while the allies dared to make only one. Only Russians and the Japanese had such desperate commitment to victory. And this is a note for those who usually claim that we didn’t know how to fight. The German forces also could not match the dedication of the Russian pilots. On June 22, on the first day of the Great Patriotic War, the Luftwaffe lost 300 aircraft. After that The German Air Force retreated from this type of combat.

By the way, the ones who received the title of Hero of the Soviet Union first - were also pilots - Kharitonov, Zhukov and Zdorovtsev. At that time, they fought near Leningrad. On June 28, 1941, each of them made an air ram. It was a truly unique situation. Why did they decide to ram? Because they were ready to fight even though they ran out of ammunition. Taking advantage of the speed difference, the pilots caught up with the enemy bombers, pressed them to the ground. Yet they managed to wiggle out and escape unharmed.

And who remembers nowadays the astonishing world record for wrecked tanks? In August 1941, in one of the battles, the Lieutenant Zinovy Kolobanovs KV-1 tank destroyed 22 enemy combat vehicles. Kolobanovs whole tank squadron knocked out 43 enemy tanks. Zinovy Grigorievich lived until 1994. He was nominated for the title of Hero of the Soviet Union for his feat, but he ended up receiving a military medal. Now the Military Historical Society has decided to restore justice. One hundred signatures have been collected to declare Zinovy Kolobanov a Hero, albeit postmortem. The lieutenant’s heroic act is also the topic of two feature films currently in production.

Here is another tank ace, whose name has also been lost to time. Tanker Dmitry Lavrinenko was the absolute record holder for the number of wrecked tanks. During his short combat record from June to December 1941, he knocked out 52 tanks, eventually succumbing near Volokolamsk.

The names of the Knights of the Order of St. George are inscribed on marble in the St. George Hall of the Kremlin. The names of all the heroes of the Soviet Union who received this title in 1941-1945 are carved in the Hall of Fame of the Central Museum of the Great Patriotic War. There are 11,657 of them. But there are historians and public figures that are ready to rewrite history, consign great names to oblivion. To this day, they are ready to "expose" feats, the glory of which hasn’t been doubted for many years. And it doesn’t make any sense. Russia needs heroes. If you want to destroy a country, turn a nation into a shallow population, deprive it of its history. Thank God, unlike other countries, we don't need to fabricate anything. We have a huge Pantheon of Heroes, but for some reason we are not showcasing it.