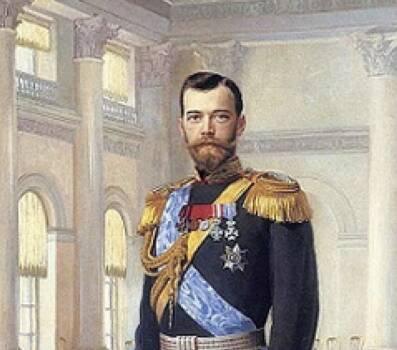 Nicholas II, the eldest son of Emperor Alexander III, was born on May 6, 1868. Nicholas received a home education, which was, although, a part of a large gymnasium course. Special programmes combining the university course of the Government and the Economic Schools of the Law Department had been developed by the best teachers. At the same time, he was educated through the General Staff. On the whole, he spent 13 years receiving an education. He was fluent in French, German and English.

During the first two years of service, Nicholas was a junior officer in the ranks of the Preobrazhensky Regiment. Nicholas' father took great interest in training his son. He regularly arranged for Nicholas' participation in meetings of the State Council and the Cabinet of Ministers. In his youth, Nicholas travelled extensively around the country and abroad.

On November 14, 1894, he married the German Princess Alice, who took the name of Alexandra Fedorovna being converted to Orthodoxy. In total, five children were born to the family of Nicholas II.

Accession to the Throne of Nicholas II

On October 20, 1894, Alexander III died from an illness. The coronation of the new Emperor and his wife took place only two years later, on May 14, 1896. During the coronation, the terrible Khodynka tragedy happened. Poor organization of folk festivities to honour the Emperor’s coronation led to a stampede causing death to 1379 people; several hundred were seriously injured. These events sparked public outrage. In light of the events on the Khodynka Field, people called Nicholas the "Bloody".

A monetary reform conducted in January 1897 led to the introduction of the gold ruble standard.

At that time, the industry had been developing rapidly with government support. Special measures were taken to facilitate industry and banking development and to accelerate the country's industrialization. All the reforms were inextricably linked to the name of the Minister of Finance and later Prime Minister S.Yu. Witte. Industrial growth was accompanied by the emergence and aggravation of the labour question. The issues of improving labour conditions and remuneration were put on the agenda.

In 1907, the new Prime Minister P.A. Stolypin proceeded to implement the agrarian reform. Its purpose was to quickly ensure allotment of the land formerly collectively owned by the rural community to peasant owners.

Nevertheless, it was under Nicholas II that two revolutionary situations developed in the country, one of which (that of 1917) was fatal to the Empire.

The first major foreign policy event to test the strength of the Empire of Nicholas II was the Russo-Japanese War of 1904–1905. The Emperor's authority in ruling and intellectual elite collapsed after the defeat of Russia in that war and the subsequent suppression of revolutionary events.

Russia's participation in the First World War proved to be the next tragic event. The war began despite the efforts of Nicholas II to prevent it. Again, Russia turned out to be unprepared for joining the war. Many millions of victims, famine, devastation and political crisis made Nicholas II abdicate the Throne on March 2, 1917.

March of 1917 was marked by anarchy and the revolutionary movement strengthening in Petrograd. The Provisional Government decided to secure the life of the former Emperor and his family and sent them deep into the country, to Tobolsk.

In early April of 1918, the All-Russian Central Executive Committee determined to transfer the Romanovs to Moscow for trial. They were initially transferred to Yekaterinburg, where they were finally shot at Ipatiev's house during the night of July 16 to 17, 1918.