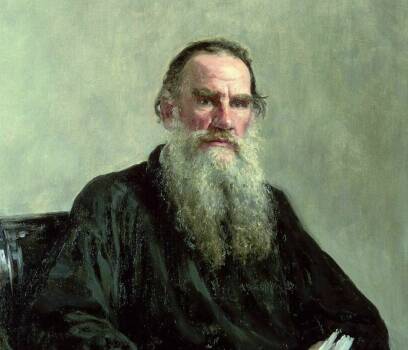 Leo Tolstoy was born on August 28 (September 9), 1828, to a reputable noble family in Yasnaya Polyana (the ancestral homestead of his mother in the Tula Governorate). He was the fourth child in the family. The future great writer was orphaned as a child, though. His mother died after giving birth to another child when Leo was less than two years of age. Seven years later, his father died unexpectedly in Moscow. Their aunt, the Countess Alexandra Austen-Saken, was appointed guardian of the children, but she also passed away after a little while. In 1840, Leo Tolstoy, his brothers and sister Maria moved to Kazan to another aunt — Pelageya Yushkova.

In 1843, the grown-up Leo Tolstoy entered the Oriental Literature Department of the Imperial Kazan University, a prestigious and one of the most famous universities. However, having successfully passed entrance examinations, the future notable Russian writer considered studying and examinations to be a formality and failed the first-year final attestation. The young Leo Tolstoy transferred to the Law Department to continue his studies, where he had a hard time being promoted to the second year. After that, however, he developed a passion for French philosophical literature and quit the university without even completing his second year. But Leo Tolstoy didn't interrupt his education. Having made his home in the inherited estate of Yasnaya Polyana, he took up his self-education. He set daily tasks for himself and tried to fulfil them by analysing what was done during the day. Moreover, Tolstoy's daily routine included working with peasants and establishing living conditions on the estate. In 1849, feeling guilty for his serfs, he opened a school for peasant children. Eventually, the young Tolstoy's self-education initiative failed, as not all sciences were interesting and came easily to him. Leo Tolstoy was going to solve this problem in Moscow, but in the preparation for the candidate exams, he took a fancy of secular life. The same happened in St. Petersburg, where he arrived in February 1849. Before passing all his examinations for the Candidate of Law Sciences, he left for Yasnaya Polyana again. From there, he often went to Moscow to devote much of his time to gambling. The only useful skill he acquired during these years was music. The future writer learned to play the piano well. Due to this, he composed a waltz and then wrote "The Kreutzer Sonata".

In 1850, Leo Tolstoy began writing the autobiographical story named "Childhood". It was by far not the first, although quite large and significant literary work of his. In 1851, his elder brother Nikola, who had served in the Caucasus, came to Leo Tolstoy's estate. The need for change and financial pressure forced Leo Tolstoy to join his brother in going to war. Already by the autumn of the same year, he was enlisted as a Junker in the 4th squadron of the 20th artillery brigade, which was stationed on the bank of the Terek River near Kizlyar. There, Tolstoy had a new opportunity to write. He finally completed the first part of his "Childhood" trilogy and in the summer of 1852 sent it to Sovremennik magazine. Its publishing house appreciated the work of the young author. The publication of the story brought the first success to Leo Tolstoy.

Nevertheless, Leo did not forget about his service. During the two years in the Caucasus, he participated in several collisions with the enemy and even distinguished himself in battle. When the Crimean War began, he was transferred to the Danube Army and he found himself in the thick of the war. Leo Tolstoy passed the Battle at the Black River and repelled the enemy's attacks on the Malakhov Mound in Sevastopol. But even being in the trenches, Tolstoy kept up writing. He published the first of the three "Sevastopol Sketches" — "Sevastopol in December 1854", which was also welcomed by readers and highly appreciated by Emperor Alexander II himself. At the same time, the artilleryman-writer tried to obtain permission to publish an unpretentious magazine called Military Leaflet, where literary-prone soldiers could publish their works, however, the idea did not receive any support from the authorities.

In August 1855, Leo Tolstoy was sent to St. Petersburg as a courier, where he completed his other two "Sevastopol Sketches". He remained there until finally quit the service in November 1856. The writer was given a warm welcome in the capital city. He became a wanted guest in literary salons and clubs, where he forged friendship with Turgenev, Nekrasov, and Goncharov. However, Tolstoy grew tired of it quite quickly, and in early 1857 he set off on an abroad journey. In the following four years, he visited many countries in Western Europe, but never found what he was looking for. The European way of life was an absolute mismatch for him.

Between those trips, Leo Tolstoy kept on writing. For instance, he wrote the story "Three Deaths" and a novel called "Family Happiness". Besides, he finally completed the short novel "The Cossacks", which he had been writing intermittently for almost 10 years. However, due to his quarrel with Turgenev and refusal to hold secular life, Tolstoy's popularity soon declined. It was topped with the writer's general disappointment and the death of his elder brother Nikolai, who was his best friend and literally died in his arms from tuberculosis. But after being treated for depression in the Bashkir farm Karalyk, Tolstoy came round to his creative activity and finally settled down. In 1862, he proposed himself as a husband to Sofia — one of the daughters of Lyubov Alexandrovna Islavina (married name Bers), an old acquaintance of his. At that time, his future spouse was 18, and Count Tolstoy was already 34. Tolstoy became the father to nine sons and four daughters, although five of the children died during their childhood.

Tolstoy's spouse became his real-life companion. With her help, he proceeded to write his most famous novel "War and Peace" about Russian society in the period from 1805 to 1812. He published excerpts and chapters of the novel between 1865 and 1869.

The next masterpiece by Tolstoy was the novel "Anna Karenina". The author began working on it in 1873. After the novel, a sudden ideological change occurred in the writing of Leo Tolstoy. The change expressed itself through the writer's new view of life, attitude to religion, criticism of power, and focus on social aspects of society. He no longer had any interest in works on secular life themes. All this was reflected in the autobiographical work "A Confession" (1884). Then followed the religious and philosophical treatise "What I Believe?", "The Gospel in Brief" and later — the novel "Resurrection", the short novel "Hadji Murat" and the drama "The Living Corpse".

Leo Tolstoy changed together with his creative works. He gave up wealth, began to dress simply and do physical work thus separating himself from the rest of the world. Tolstoy devoted great attention to the matters of faith, though the philosophy took him far away from the bosom of the Russian Orthodox Church. Moreover, he actively criticized church foundations in the novel "Resurrection". Because of that, the Holy Synod excommunicated Leo Tolstoy from the Church in 1901, although the decision was rather a statement of fact than a punitive measure.

Meanwhile, Tolstoy devoted much of his time to helping peasants, taking care of their education and providing food for them. During the famine in the Ryazan Governorate, Leo Tolstoy opened canteens for the needy, where thousands of peasants could get some food.

On October 28 (November 10), 1910, Tolstoy secretly left Yasnaya Polyana and went to the border by random trains. However, at the Astapovo Station (currently — the Lipetsk Region) he had to get off the train due to lung inflammation. On November 7 (20), the great writer passed away. He died at the stationmaster's house in his 83rd year of life. Leo Nikolaevich Tolstoy was buried in his Yasnaya Polyana estate in the forest at the edge of a gully. Several thousand people came to his funeral. Tribute to the writer was also paid in Moscow, St. Petersburg, and even abroad. On the occasion of mourning, some entertainment events were cancelled, the work of factories and plants was suspended, and people went to street demonstrations with portraits of Leo Tolstoy.