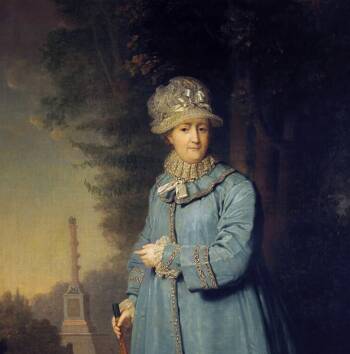 Being a foreigner by origin, she sincerely loved Russia and took care of her people's welfare. The spouse of Peter III occupied the throne by means of a palace coup and tried to implement the most prominent ideas of the European Enlightenment within Russian society. At the same time, Catherine the Great opposed the French Revolution of 1789–1799 being indignant about the execution of French King Louis XVI Bourbon committed on January 21, 1793, thus predetermining Russia's joining the anti-French coalition of European states in the early 19th century.

Catherine II Alekseevna (née Sophie Auguste Friederike, Princess of Anhalt-Zerbst) was born on May 2, 1729, in the German city of Stettin (currently the territory of Poland) and died on November 17, 1796, in St. Petersburg.

As the daughter of Prince Christian August of Anhalt-Zerbst, who was under Prussian arms, and Princess Joanna Elizabeth (née Princess of Holstein-Gotthorp) was related to the royal houses of Sweden, Prussia and England. She received a home education, which included not only dancing and foreign languages, but also the basics of history, geography and theology.

In 1744, she came to Russia with her mother at the invitation of Empress Elizabeth Petrovna and was baptized according to Orthodox custom under the name of Catherine Alekseevna. Soon her engagement to Grand Duke Peter Fedorovich (future Emperor Peter III) was announced, and in 1745 they got married in church.

Catherine could see that the court loved Elizabeth, but did not accept many strange features of the heir to the throne. Catherine understood that, perhaps, after the death of Elizabeth, she would have to ascend to the Russian throne with the support of the court. Catherine studied the works of the French Enlightenment figures, as well as jurisprudence, which had a significant impact on her worldview. Moreover, she made every effort to study and, perhaps, to understand the history and traditions of the Russian state. Due to her desire to cognize everything that was considered to be Russian, Catherine won the love not only of the court but also of the whole of St. Petersburg.

Catherine's relationships with her husband were never warm and sympathetic. After the death of Elizabeth Petrovna, their relationship got only worse and even hostile at times. Fearing to be arrested, on the night of June 28, 1762, when the Emperor was in Oranienbaum, Catherine committed a palace coup with the support of the Orlov brothers, N.I. Panin, K.G. Razumovsky, and E.R. Dashkova. Peter III was exiled to Ropsha, where he died under mysterious circumstances after a little while.

Having become the ruler, Catherine tried to implement the ideas of Enlightenment and to organize the state in accordance with the ideals of this most powerful European intellectual movement. Nearly since the very first day in power, Catherine was actively involved in public affairs and proposed socially significant reforms. In 1763, the Senate reform was conducted at her initiative, which significantly increased its efficiency. In 1754, Catherine carried out the secularization of church lands as she wished to strengthen the dependence of the church on the state and to make additional lands available to the nobility which supported the policy of social reforms. This was the start of efforts to harmonize the territorial administration in the Russian Empire, after which the hetmanship in Ukraine was abolished.

Being an advocate of the Enlightenment, Catherine the Great opened a number of new educational institutions, including the ones for women (the Smolny Institute, the Catherine School).

In 1767, Empress convened a commission consisting of the representatives of all population strata, including peasants (except serfs), to make up a new law code, i.e. a set of laws. In order to guide the activities of the Legislative Commission, Catherine prepared the "Order" based on the works of enlighteners. The document was, in fact, a liberal programme for her reign.

When the Russo-Turkish war of 1768–1774 came to an end and the uprising under the leadership of Emelyan Pugachev was suppressed, a new stage of Catherine's reforms began. During that period, the Empress, being unlimited in power, independently developed legislative acts of utmost importance and implemented them.

In 1775, a manifesto was issued to allow the free opening of industrial enterprises of any kind. In the same year, a provincial reform was carried out to introduce a new administrative structure of the country, which survived until 1917. In 1785, Catherine issued charters to the nobility and some cities.

Within her foreign policy, Catherine II continued to pursue an aggressive agenda in all directions — northern, western and southern. It resulted in the strengthening of Russia's influence on European affairs, splitting the Polish-Lithuanian Commonwealth into three partitions, strengthening the positions in the Baltics, accession of Crimea and Georgia, and participation in countering the forces of revolutionary France.

The contribution of Catherine II to Russian history is so monumental that many works of art in the Russian culture revere her memory.